The truth behind girls being possessed in makeup tutorials

What started as a lively makeup tutorial turns into a ghastly scene when an unidentified girl, presumed demonically possessed, starts banging her head on the keyboard. And as blood drips from her swollen forehead and down her face, you’ll definitely stop watching.

The internet loves all things creepy and disturbing but there's a new video that has been circulating lately and it's pretty terrifying.

Party Makeup by Nikki is a seemingly harmless makeup tutorial at first but it soon becomes increasingly disturbing. In the clip, a woman named Nikki takes us through her makeup routine. So far, pretty tame. However, a little bit into the tutorial, the left side of the screen changes to what looks like CCTV footage of darkness and Nikki immediately starts staring directly into the camera before sinister music cuts in.

Nikki then starts banging her head against the table and blood splatters everywhere. After the episode, she sits in her chair dead still with a swollen face and one eye twitching, while blood pours down her face. 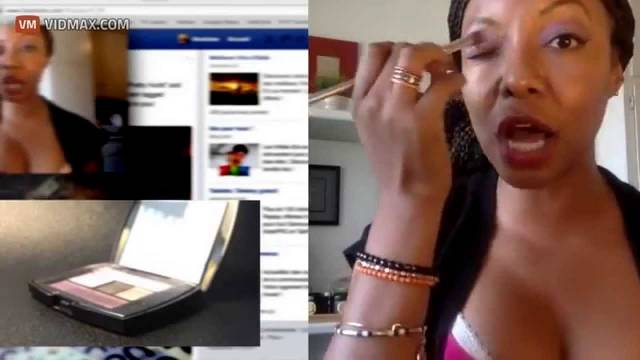 Is Party Makeup by Nikki real?

Everyone wants to know if the tutorial is real and some have speculated that Nikki had been possessed by a demon. The video was originally uploaded in 2014 by The 15 Experience, who claims to be a hacker that has managed to access security footage proving paranormal activity at a haunted location.

The video has now been removed from The 15 Experience's channel but the description reportedly read: "The video was sent to me anonymously. I do not have any information beyond that. It is for you to decide no your own whether it is real or fake."

The 15 Experience hacker encourages viewers to visit the15experience.com on their videos and at the end of Nikki's tutorial, however, the website no longer exists. According to a YouTube video, the website gave viewers a look at found footage style paranormal activity. It's pretty much Blair Witch and not real.

Nikki has now also been identified as Haitian-American actress and writer Nakia Secrest. Her tweet from June 2014 proves that the video was definitely not real and she's very much alive. She tweeted: "Almost at 1 million views."

But another question seems to linger in everyone’s mind: Is the video even real?

It has become a subject of debate and has borne countless theories since 2014. A lot of people don’t buy the demonic possession claims. They believe that the woman is mentally ill and was having a breakdown during the video. Some also speculated an attacker can actually be seen hiding behind the woman and was the one who slammed her face into the screen monitor.

The video has continued to boggle the minds of many until a tweet by a certain Nakia Seacrest confirmed that it was, after all, a hoax.

Secrest, an actress and producer, turned out to be the lady in the video. In the tweet, she announced her role as the makeup expert Nikki in the tutorial video and revealed that it was all for a movie. Apparently, the clip was a promotional strategy for the film The 15 Experience. She even proudly tweeted that she’s happy her video grabbed a lot of viewers.

Makeup tutorial The truth behind possession